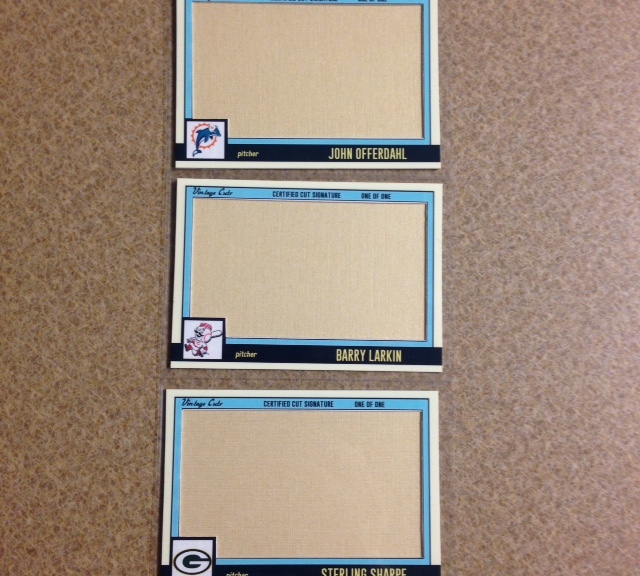 The way my customs work is unless I have some one touch magnetic cases, I don’t make the cut autograph cards because I want them protected well.  Plus because of the adhesives I use, to put these together I don’t like to store them in penny sleeves / top loaders.  The adhesive sometimes sticks to the sleeves and when it’s put into a top loader, sometimes it will smear onto the card.  I go through a box of 25 in about 6 weeks and at about $40 a pop it can get a bit pricey.

In the meantime, I can still go after autographs, at least through the mail.  So I did a little research, going through the TTM Manager at the sports card forum, and see who is a willing signer.  I came up with three guys I decided to go after 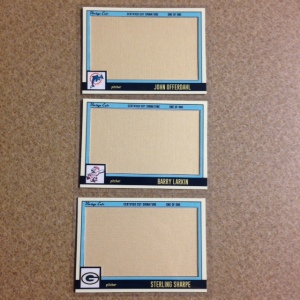 Next up with Barry Larkin.  The guy signs, he is probably one of the best through the mail signers in recent memory.  This is part of the reason he is in the Hall of Fame, no not because he loves to sign for the fans.  It’s because his priorities are right on!  He is one of the most popular players in Reds history, sure he was a great player, but it was his personality that put him over the top. OK maybe that and his 12 All Star appearances.

Finally I went with Sterling Sharpe.  I always felt that he was one of the unappreciated wide outs.  He was elected to the Hall of Fame, so he 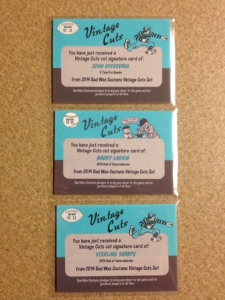 was appreciated somewhat, but he was never considered the best of his generation.  This might have been because he was playing in the same generation as guys like Jerry Rice, Marvin Harrison and Michael Irvin.  Make no bones about it though he was very very good.  Like both Offerdahl and Larkin, he is also a very quick signer as well.

As for the design, I went with the older design, with the big signature area.  The card I used as the blank slate is a metallic finish business card.  It’s tough to see in the picture but it looks pretty cool.  These were actually sent off on Saturday, so I am hoping some might be coming back by the first week in February.  On another front I am working on the mini cut auto card for send out.  A hint of what it’s going to look like, just think 1953 Topps baseball.  I should have pictures of it read for tomorrow.