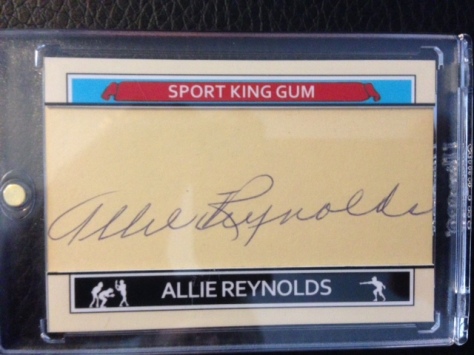 I want to preface this post by saying that Allie Reynolds deserves to be in the Hall of Fame.  What’s sad is that most players that played with him are now dead and he has little or no chance of getting in through the Veteran’s Committee.  He is a six time All Star, became only the second pitcher in MLB history to throw two no hitters in a single season, recorded 11 or more wins in 12 straight seasons, owns a career 182-107 record, and a 7-2 record in the World Series.  The most important aspect of his career though, he became the ace on the Yankees rotation, that they sorely needed to start winning World Series.  In fact, he was on SIX World Series Championship teams! Including five straight from 1945-1953.  Oh and to make it even sweeter, most of this was done AFTER he turned 30.  When I told my dad that I was able to get Allie Reynold’s autograph, he told me straight out, don’t fuck that one up!  In fact I’m starting to believe that Reynolds may have been one of his favorite players from his early years as a baseball fan.  I think I know what he’s getting this year for father’s day!

The issue I had while making this card was simple, Reynolds has a big ass autograph!  I actually did very little trimming on the sides to fit his entire signature in.  I have the same problem with a Charlie Gheringer autograph that at some point I have to turn into a card.  I actually had to clip the end of the “s” in Reynolds and came very close to clipping the “A” in Allie, but was able to avoid that by tilting it a little. So glad I didn’t “fuck this one up”.