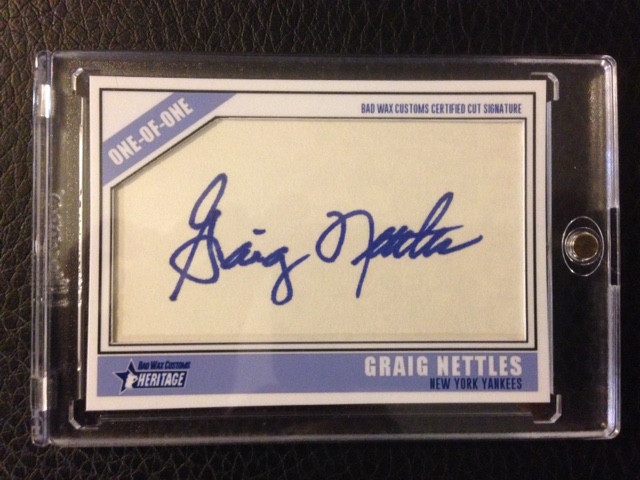 I had to do it.  Actually to be honest most of my designs borrow from Topps’s designs.  This one though is completely torn from this year’s set.  I don’t like the way they did the cut autographs, but I do like the design.  Of course I did do some alterations.  Anywhere there was Topps, I replaced it with Bad Wax.  Before you tattle on me to Topps, just realize that I don’t sell these cards.  They are for my personal collection.  I am first and foremost a cut autograph collector and with the scarcity in these sets, the cost per card is astronomical.  So . . . I make my own damn cards.

As for the player, I won this card off eBay, it does come with JSA certification (for whatever that’s worth), and I purchased it for $9.59 including shipping.  A bit steep but Nettles is a fan favorite and for a signed index card of him, it’s actually not a bad price.  I’ve seen the average run about $14-17 shipped.  As many of you know I am a Yankee fan.  When growing up in the late 70s and early 80s, I had a few favorites.  Thurman Munson, Ron Guidry and Graig Nettles.  Those three were my childhood heroes.  They also command a lot of $$$ for autographs.  I have a Gator autograph already, Munson is beyond my means and the Nettles has eluded me for years.

Nettles is borderline Hall of Fame worthy.  His resume includes six All Star games, two World Series rings, an ALCS MVP award, two time Gold Glove winner, one time AL homerun champ, and most importantly he was captain of the Yanks from 1982-1984.  Things holding him back was his 0.248 batting average and 390 home runs.  If either were higher, he would be in.  Make no bones about it though, he was a 3-5 in the lineup hitter for the majority of his 22 year career.